What on Earth is the Karst?! 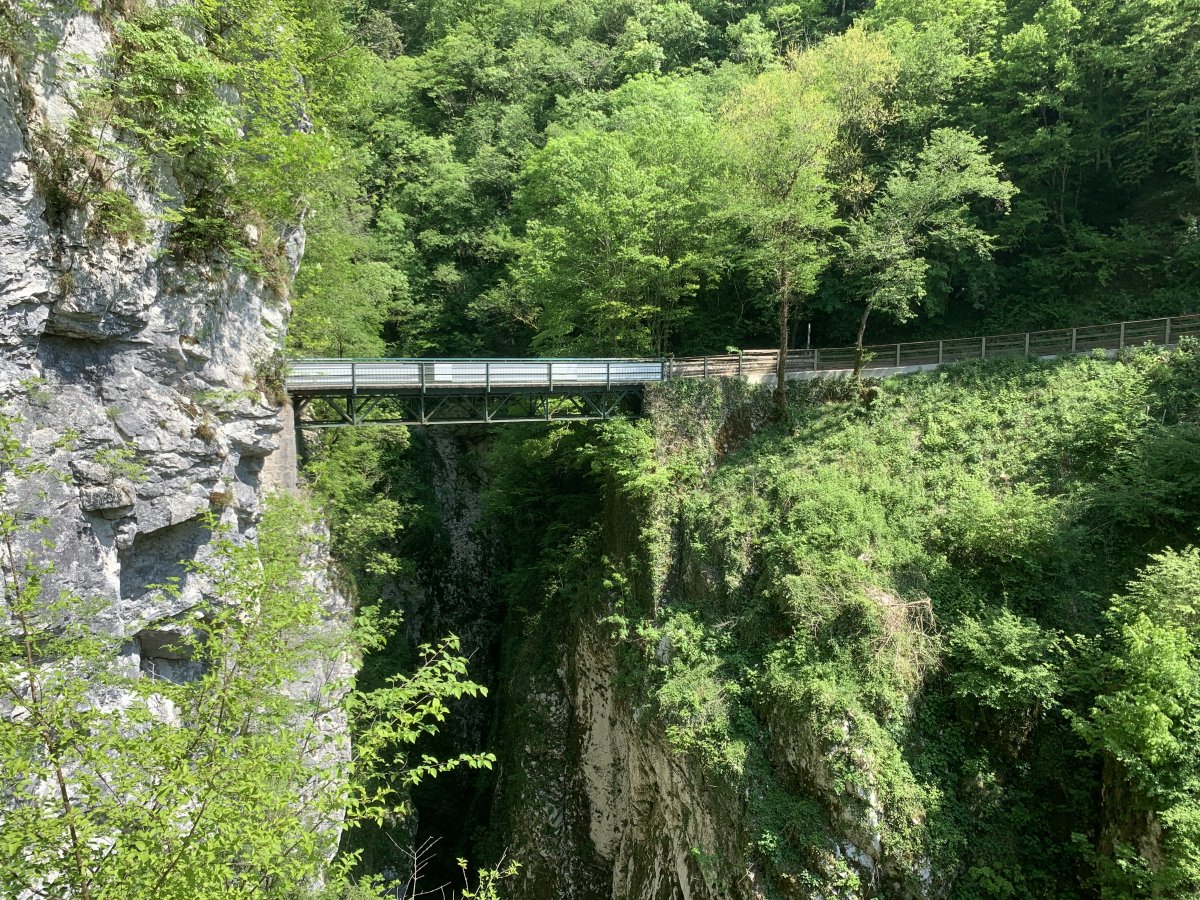 Slovenians often bang on about the mysterious Karst, Karstic regions and all things Karst, without realising, apparently, that YOU, the visitor to Slovenia, has absolutely no idea what they are talking about, so the irony is that no wonder the Karst is mysterious!

Well now it's time to explain a few simple things about the Karst that will make little old Slovenia even more amazing, so let's rock on..

So "Karst" is a geological term that describes ancient rocky regions (in Slovenia's case mainly limestone) where water has eroded and cut through the rocks over millions of years and created amazing stony stuff like caves, sink holes, underground rivers and disappearing lakes. 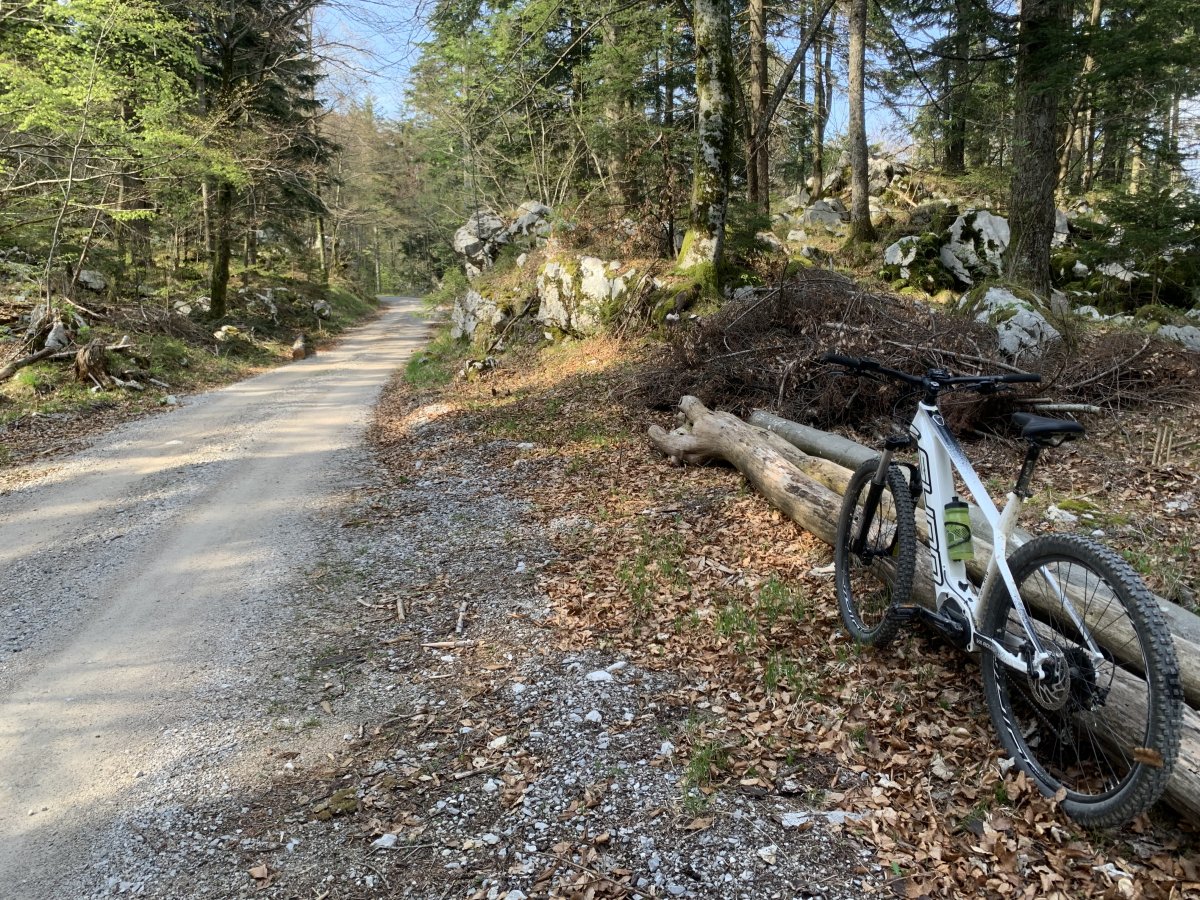 And Slovenia is pretty much the capital of the Karst! Yes folks, the German word "Karst" actually comes from Slovenia, as many years ago, when a term was established to describe Green Slovenia's rocky paradises, Slovenia was part of the German speaking Austro-Hungarian empire.. so next time a trivia question comes up something like, "which German word is Slovenian", you will know the answer!

Over HALF of Slovenia is covered in these amazing Karst formations and when you consider there is pretty much another whole country UNDERNEATH the ground in Slovenia, we are talking about a pretty big area!

So now you actually know what the Karst is, lets celebrate some of the amazing Karst phenomena you can find in Green Slovenia on your next visit!

a tiny section of the huge Cerknica disappearing lake..

Here are some Karsty things to enjoy!

There are over 15,000 discovered caves in Slovenia.. You might have heard of a few of them like pretty Postojna cave, the completely overwhelming Skocjan cave or maybe the underground paradise that is Krizna cave.

But it is also our mission here at Lipizzaner Lodge to help you discover & explore some of the other amazing, but lesser known caves, such as Planina cave, "home of the Baby Dragons", Dimnica cave, "Devils Barbeque" or Pivka cave, "Black cave". This is the future of Green Slovenian tourism.

Yes of course, the show caves here are amazing, but just because a particular cave does not have billboards all over the place with cheesy photos of a train and smiley, wavy kids, it doesn't necessarily mean you won't also have an amazing rocky adventure at another "unknown" or secret cave!

perhaps the most beautiful cave of them all is the colour fest of Vilenica..

These are genuinely mysterious lakes that fill with massive quantities of fresh water bubbling up from numerous sink holes in Slovenia's Karst underground during the autumn.. then they completely empty in the summer! The biggest one in Europe is the largely unknown lake Cerknica (just 25 mins from the Lodge), where in winter, over 50% of all European bird species hang out and in summer it explodes into a green paradise.

But there are many more, such asthe massive Planina Disappearing Lake, which is so big you can even see it from the A1 motorway!

There are another 17 disappearing lakes of Pivka even closer to the Lodge and some of these are connected underground in a mysterious way so that one may completely drain overnight and then the neighbouring lake in the next valley fills by the morning!

Nobody can 100% explain how these Karst phenomena work and all attempts to control them have failed.. once again Mother Nature wins. There are days of hiking, butterfly spotting and adventure just waiting for you to explore at these lakes. 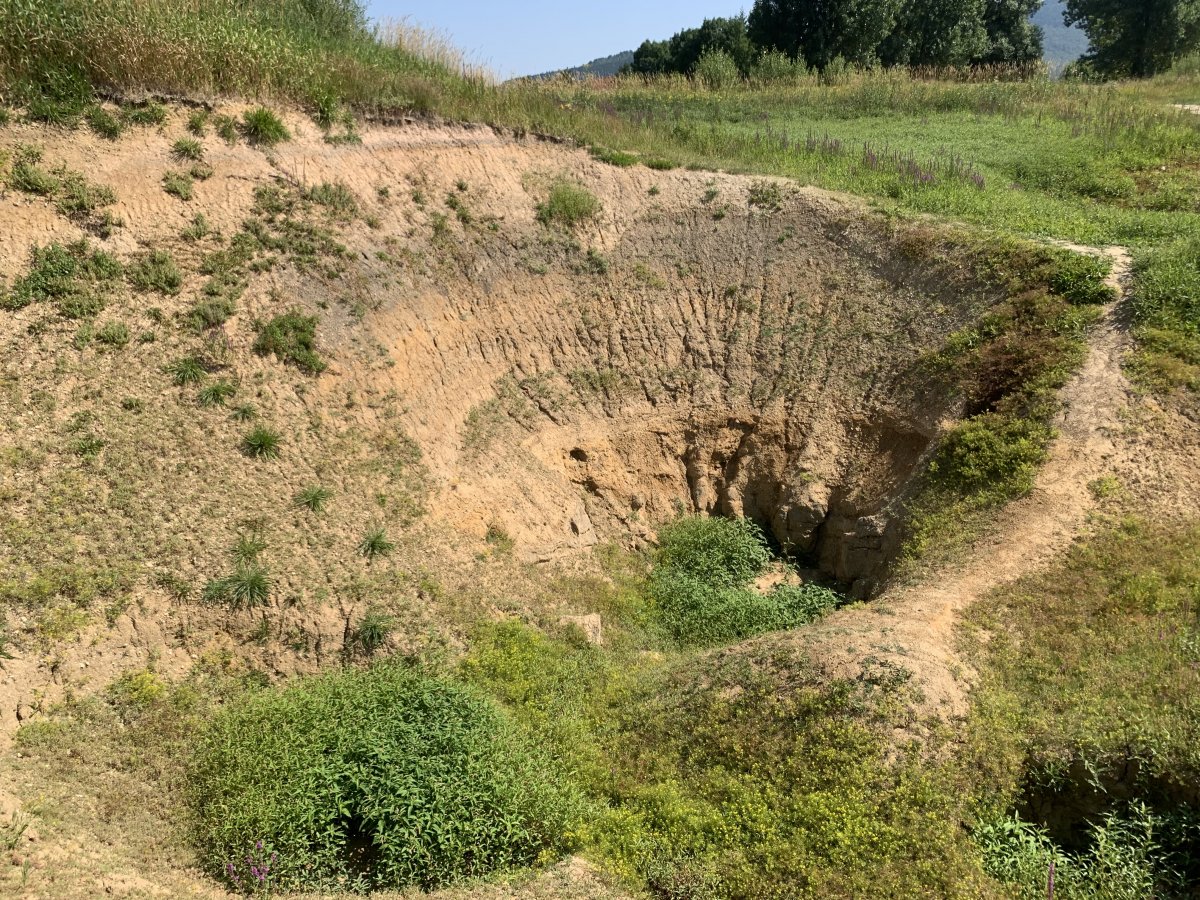 Just one of the massive sinkholes at the biggest Disappearing Lake of them all at Cerknica..

By definition, any city stuffed with houses, roads, thousands of cars, buses and shops can never be as"green" as the real Slovenian nature. If only a small fraction of the money wasted on publicizing Ljubljana as a "green" city, was spent sensibly on bringing your attention to the real Green Slovenia, then truly world class places like the Cerknica lake and the other unique disappearing lakes of Slovenia could be properly preserved, enjoyed and heralded as some of the true Green secret gems.

Let's give you just one small example.. there is a wonderful micro museum of the 17 Disappearing lakes in a little village just outside Pivka, off one of the busiest tourist roads in Slovenia that leads from Postojna down to Croatia. This museum explains beautifully how the 17 lakes are formed & interconnected, loads of stuff about the local nature, history and could easily be your springboard to days exploring this amazing Karstic area. But you wont believe this, seriously, there is not even a sign in English, German or Swahili on the main road to show the thousands of tourists who use this road every day (mainly German) just what they are missing!! 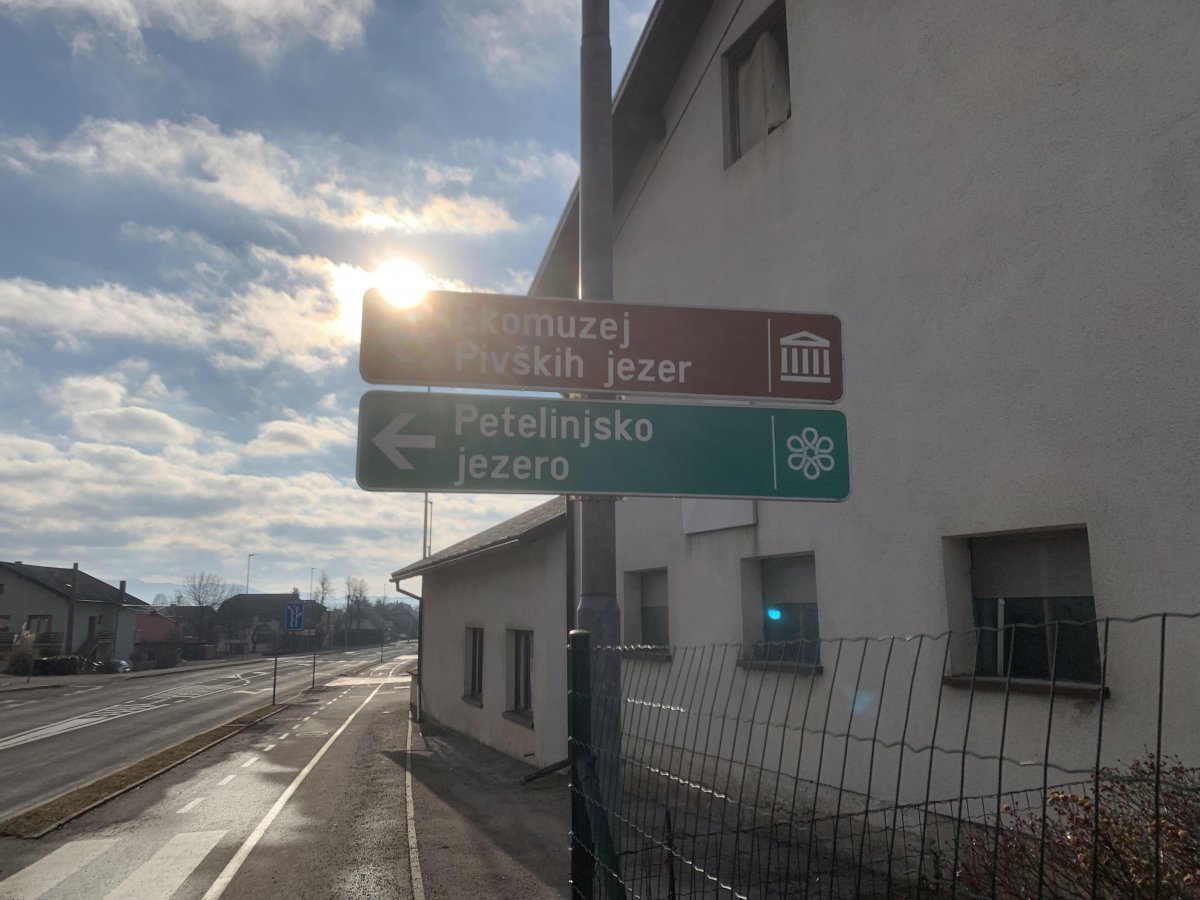 would you guess in a million years from these signs that the fantastic Museum of the 17 Disappearing Lakes of Pivka was just down the road!

Additionally, this museum is often closed or only open to large groups in buses.. it drives us absolutely bonkers, when we know exactly that visitors like you just need a little more good info and access to be able to find and enjoy these special places. The local tourist people here have been trying to get this museum off the ground, we sincerely hope that by mentioning it in this blog, we can encourage you to find out more, ask questions and visit!

So if ever we hear someone complaining that Bled lake is a touch busy for them in August and they have to queue up to get their Crem Schnitta, (which are delicious by the way), then they will get absolutely no sympathy here, we will simply refer them to this amazing museum and the 17 Disappearing lakes of Pivka as just one example of the many, many, many secrets of Slovenia they are COMPLETLEY MISSING!

Did you know there is a massive natural stone window, "Okno", just in the neighbourhood of the world famous Postojna cave, where you can hike a bit along the top of a 1,000m high Karst cliff face, (don't worry it's not scary)! and see the stunning Green Vipava valley below through the eye of the window!

Even closer to Postojna is the uberamazing and totally unpronounceable "Rakov Skocjan", a hidden, prehistoric 3km long rocky green valley separated by 2 huge and stunning natural stone bridges! You could easily spend most of your day enjoying either of these special places and many of our guests have! 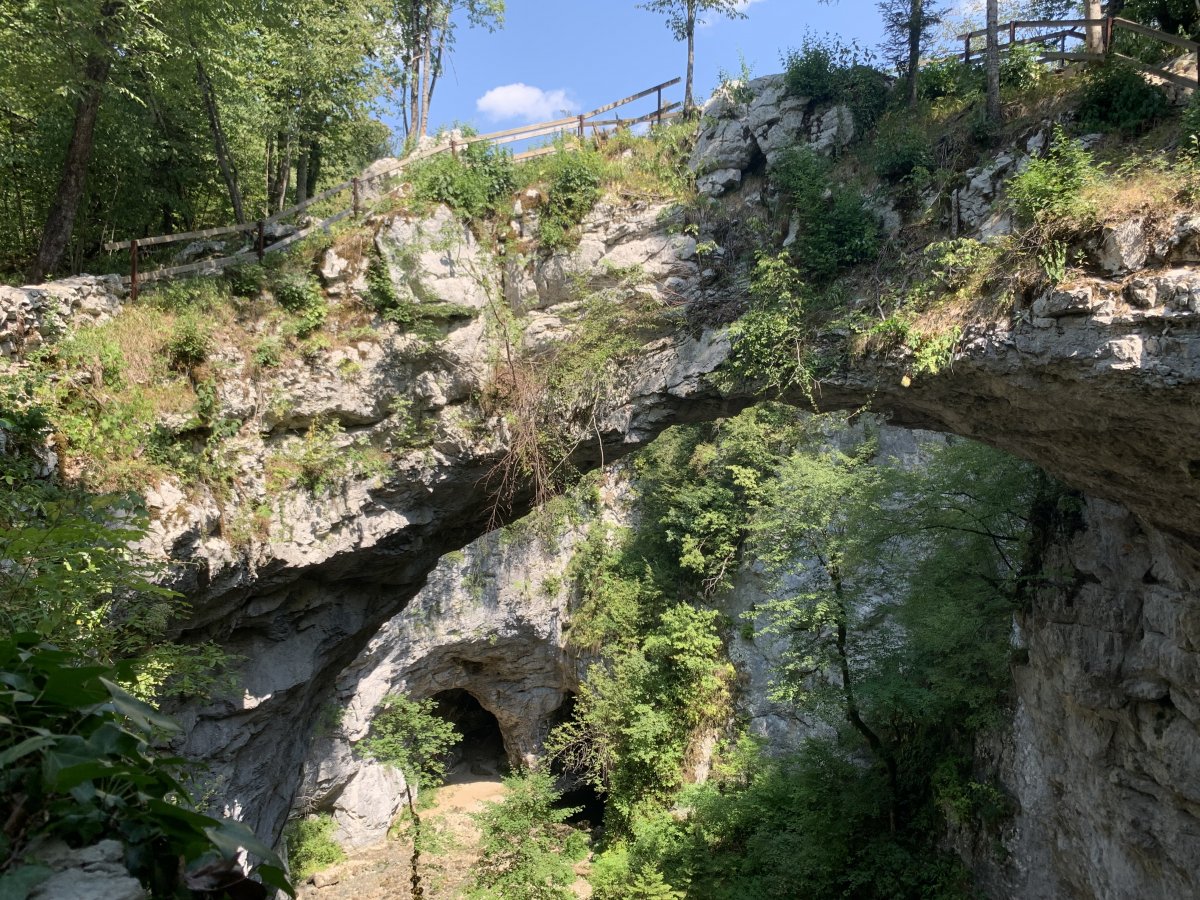 And please don't think the Karst is just a load of rocks! Over the years, trees and green have grown over the stone to make Slovenia the unique Green paradise that will absolutely thrill and amaze you. You will even find that one of Slovenia's seven wine regions is called the "Kras", (Karst) or "Teran" region, (just 20 mins from the Lodge) and is totally covered with stunning green vineyards and rocky outcrops!

The red soil is really thin here, but full of iron so that the grapes produce a unique blood red "Teran" wine that is perfect with the local prosciutto or a plate of cheese! 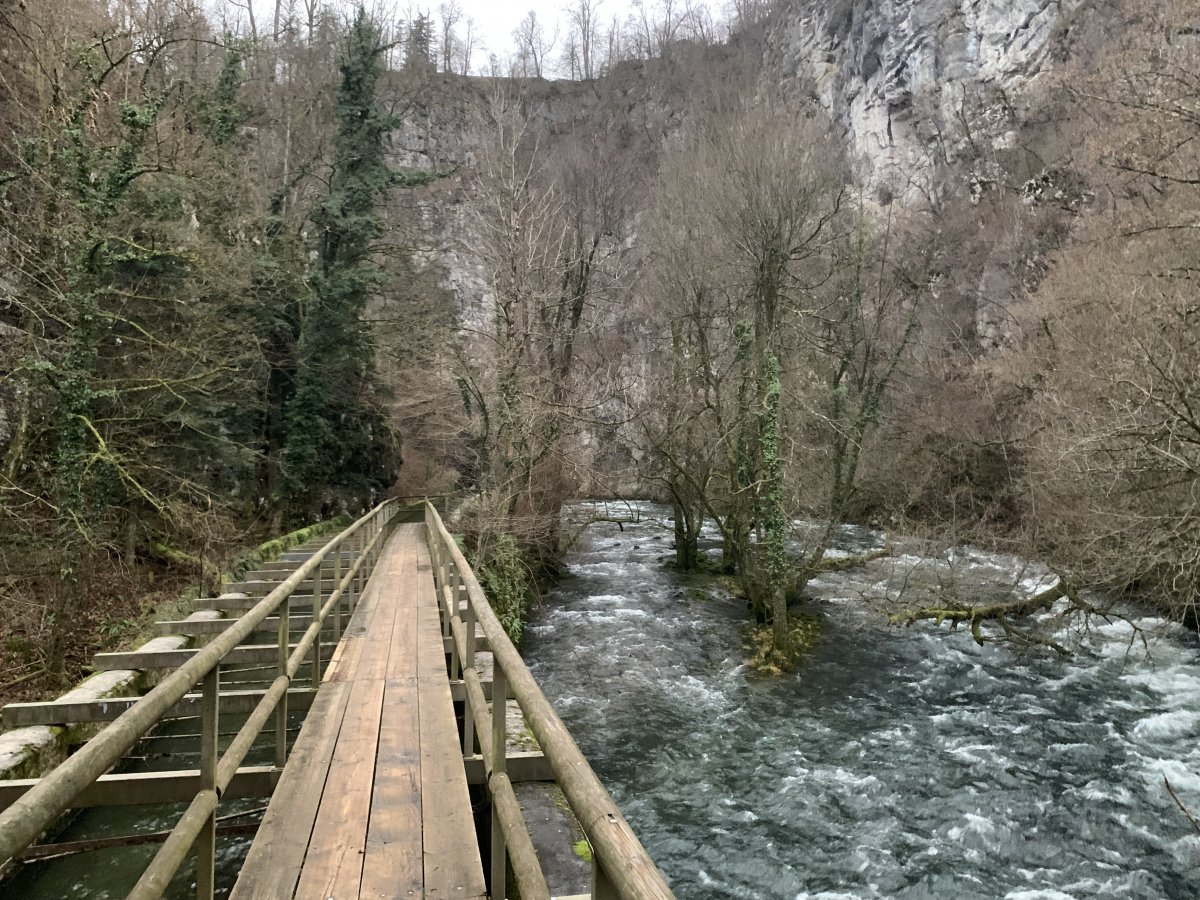 this is where the River of 7 Names becomes the Unica River, pouring out of the Planina Cave..

In one of the caves we have already mentioned, Planina, you can see something that you cannot see in any other cave in Europe and that is two rivers crashing into each other underground to form a "new" river, in fact one of the 7 rivers of the "River of 7 names".

We regularly send our guests off on daytrip adventures to these lesser known local rocky Karst wonders and we know from our own experiences and guest feedback that you will absolutely love them.

Our guests are often shocked at how these places they have heard nothing at all about often make their most memorable days here and are even more beautiful than they could ever have expected! 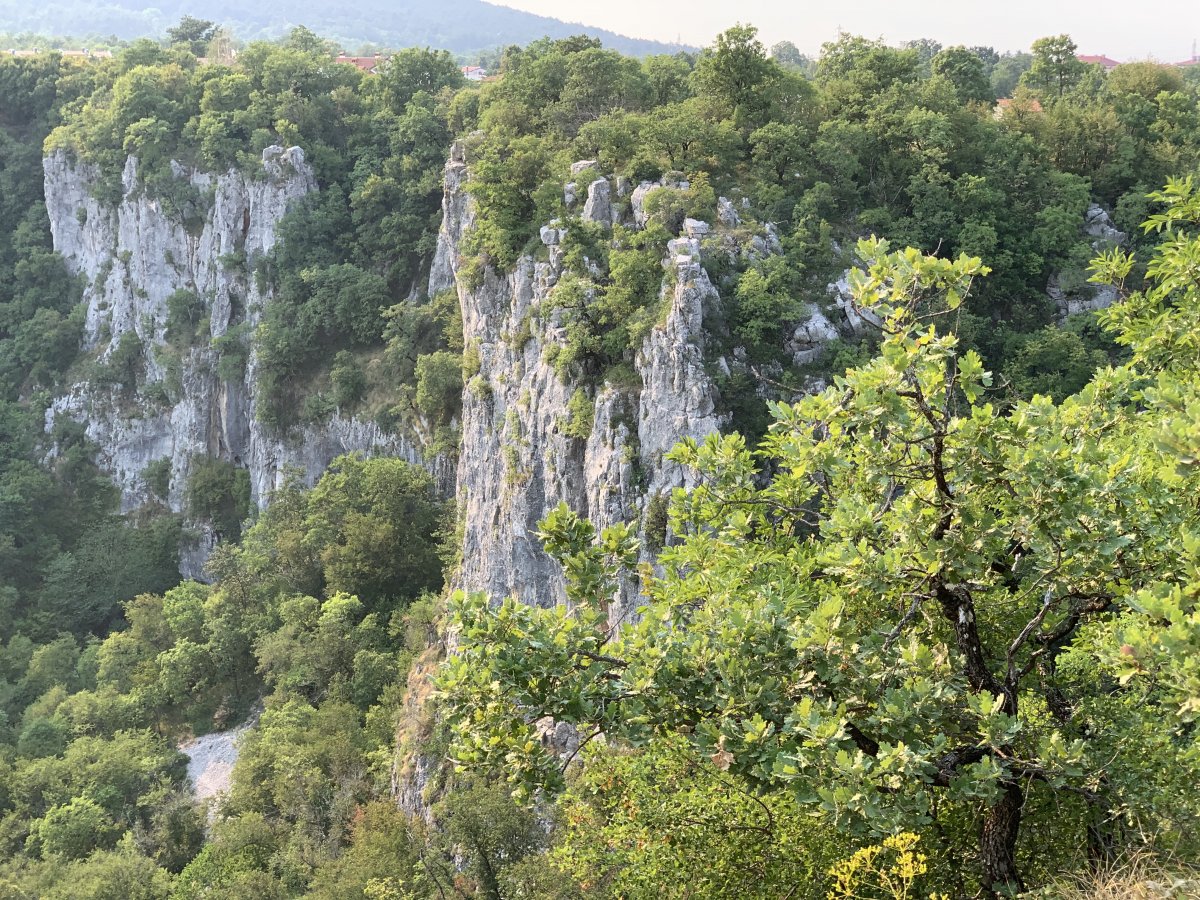 you can hardly believe this massive Karst crater is hidden away, just 5 metres from a main road..

The Karst IS pretty much Slovenia, so many of the rivers, gorges, waterfalls, mountains, caves, lakes, forests and other natural wonders we have here will, technically, be in the Karst, but more importantly for you, they are all in Green Slovenia!

Indeed the very mini region in which Lipizzaner Lodge is carefully located is called the "Green Karst", we are in the home of the Karst, so we really thought it was time you knew exactly what the Karst is! 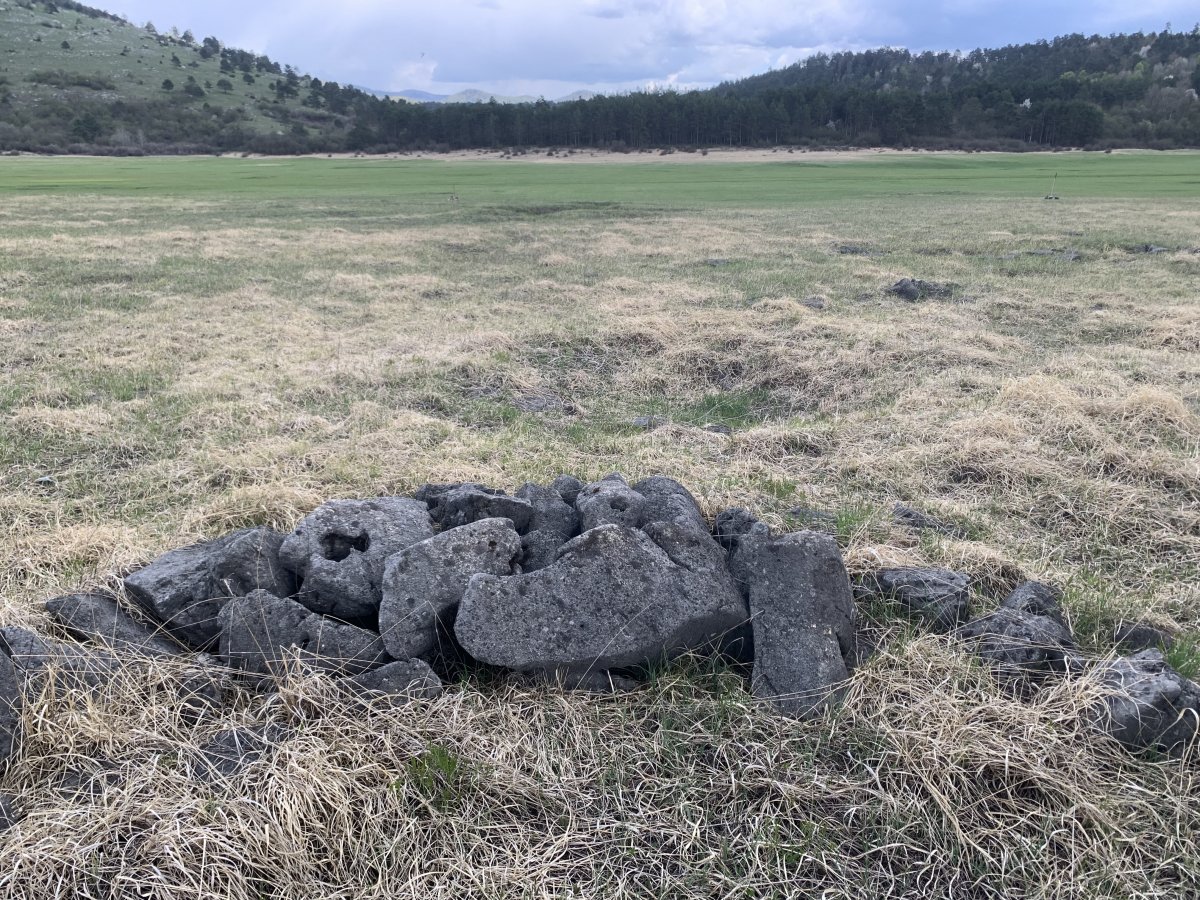 looks like a pile of rocks, but this is the centre of a disappearing lake, where water will pump out of here to create the new lake..

And there are lots of other Karst regions around the world, we were gobsmacked when we received a visit from a lovely Irish couple, who stayed at the Lodge to pay homage and visit the home of the Karst. But this is the thing, they live in a small area of Karst in the very west of Ireland and we were surprised to hear they use the same Karstic expressions to describe all their sinkholes and rock formations, such as "Doline" or "Polje", but pronounced with that beautiful Irish accent! Grand! 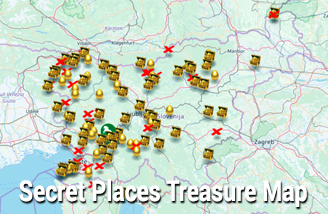